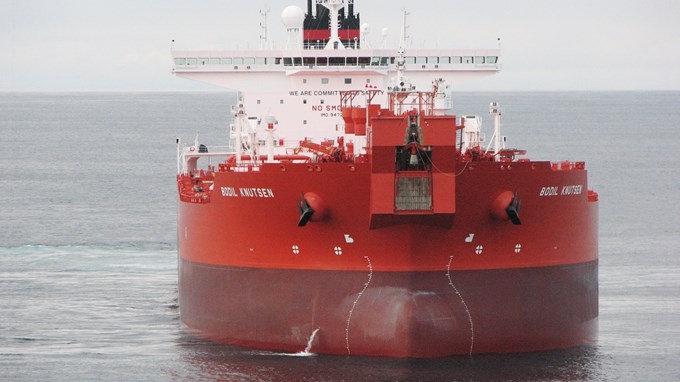 Continuing its commitment to refining the development of products that serve the offshore oil and gas industries, MacGregor now offers its 5th generation Pusnes bow loading system. Featuring greater hose connection capabilities than previous generations, the new system promises operators all the proven safety and performance credentials as earlier ones, but with a wider operating scope.

Bow loading systems (BLS) enable a shuttle tanker to safely and efficiently load oil from an offshore production or storage facility, such as a floating production storage and offloading (FPSO) installation. “Even with the advanced stability systems such as weather-vaning and dynamic positioning (DP2) in place, connecting two vessels in an open sea can be a difficult and dangerous business,” says Stein Are Andersen, Sales Manager Offshore Loading Systems, MacGregor.

Increased operating opportunities
“The new-generation BLS system is capable of connecting the loading hose in wave heights up to HS 4.5m and at an entering angle of 110 degrees. This is 50 degrees more than our previous system,” Mr Andersen continues. “Once the hose from the FPSO is connected to the bow loading system coupler valve, the whole system must deal with a sea’s considerable rolling and yawing motions up to wave heights of HS 5.5m.

“The ability to connect at much wider angles increases operating opportunities in conditions where shuttle tankers would normally struggle to connect,” he stresses.

“Also, shuttle tankers can stay connected, even in sea states which generate wider relative angles to the FPSO, which traditionally would have meant that they must disconnect for safety and operational reasons.

“Together these deliver significant cost savings by improving operational times and connection speeds.”

In addition to adhering to strict environmental responsibilities, shuttle tankers have to operate in extremely hostile conditions. The majority serve operations in the North Sea, offshore Brazil and the Arctic north of Russia. The 5th generation Pusnes bow loading system has therefore been specially designed to suit environmental temperatures ranging between +45 degrees to -20 degrees Celsius.

The hose-handling system comprises a 20” bow-loading coupler, located forward in the centreline of the ship. The coupler is connected to the Pusnes hose end valve from the offloading platform or the FPSO/ FSO installation.

A vital part of the system is the Pusnes moment-free bow loading coupler, which allows the coupler to follow the movement of the hose. The system includes a hose winch for pulling in and handling the hose during the connection and disconnection phases.

The hawser-handling system includes an adjustable roller fairlead, a chain stopper and a twin-drum traction winch for mooring operations during tandem loading, all are located on the platform deck.

The chain stopper is hydraulically-operated and self-locking, and can be released under full design load. Aft of the chain stopper is a guide roller with a built-in load cell which operates together with a traction winch. The system also includes a storage reel or bin for storing the messenger line during loading.

As the offshore oil and gas industry undergoes its tentative return to growth, FPSO projects are already restarting off Brazil and the UK, and in the next three years experts anticipate renewed activity in the South China Sea, North Sea, and Gulf of Mexico.

Projects of the immediate future, will be designed to keep costs as low as possible and efficiency high. Even with fewer competitors in their own sector, operators in this field will be mindful of the competition they face from outside, from the US shale oil firms and elsewhere, and investing wisely to leverage the latest technologies.

These were the challenges facing MacGregor when, in a recent contract with Teekay Offshore Partners, it was called upon to redesign its shuttle tanker bow-loading system to fit Teekay’s requirements.

Designed to fit Brazilian, Canadian and North Sea loading operations, MacGregor will deliver the design, fabrication and commissioning of the system on four of Teekay’s latest shuttle tanker newbuilds. The vessels are under construction at Korea’s Samsung Heavy Industries to Teekay’s new E-Shuttle design.

The new Aframax tankers will incorporate many other cutting-edge technologies, including dynamic positioning (DP2) and the use of liquefied natural gas (LNG) as fuel in combination with clean battery power. The first two are scheduled for delivery by 2020 and are planned for deployment in the North Sea.

A Pusnes bow loading system from MacGregor enables the safe and secure loading of crude oil from an offshore production or storage facility.